Adding Video Caller I.D.Technology to Every Call,
the MobiLine App Will Redefine the Telephone Call

Using its patent granted video caller I.D., MobiLine plans to help billions of smart phone users add face value to every call. Unveiling at CES 2020, the app makes it easy to add a personal video invitation to every call. Founders of the New York startup believe their app will help smart phone callers make more live connections with family, friends and customers. Call recipients will also benefit because they can see and hear what every call is about before they answer the phone.

Las Vegas, NV, January 2nd, 2020 – With 5G poised to take off in 2020, the smartphone app TikTok taking the world by storm with over a billion users and studies showing that, for the first time, people are spending more time browsing their smart phones than watching television, video tech companies are poised to dominate headlines at CES 2020, the world’s largest consumer technology tradeshow.

One startup unveiling its video calling app at CES, is MobiLine. MobiLine allows users to record up to a 15-second video clip that becomes a video invitation to every call recipient, giving the call recipient a video preview of the call before they answer the phone.

A Mobiline user who captures a video of himself or herself on the platform can integrate the short clip into their most important outbound phone calls. While the MobiLine app can certainly be used to enhance outbound phone calls to friends and relatives, the company’s board advisers see it taking off in the business world as well, allowing business owners and entrepreneurs to record what is effectively a 15 second elevator pitch, moving the caller one step closer to closing a deal or making a sale.

“With apps like MobiLine ready to seize the faster internet brought on by 5G, our smart phones will become more important to all of us, and command more of our attention, than our TV’s,” said MobiLine CEO Stas Borukhoff.

Whether you’re a sales associate trying to close a deal with your hottest prospect or a grandmother eager to share important news with your family, when you make your most important phone calls of the day, you probably do not want to be sent to voice mail. Just as an email sent with a high-priority flag is more likely to be opened by the recipient, a phone call that starts with a MobiLine video invitation is more likely to prompt a live conversation. “How can you tell people – as you’re calling them – that they should answer your call because of the importance, even urgency, of your message? MobiLine is the solution,” said Borukhoff.

With one of three patents on display at its CES 2020 tradeshow booth (booth #52134) MobiLine (www.MobiLine.com) will launch its free smart phone video communications app shortly after CES ends when the app will be available on both Apple and Android smart phones. Currently, the app is only available for IPhone beta users.

Many smartphone owners who previewed the app in its pre-launch stage, in both personal and professional communications, agreed that MobiLine will protect them from the unending stream of spam calls from telemarketers. There were more than 48 billion robocalls made in 2018, up 56.8% over the estimated 30.5 billion robocalls in 2017. As these numbers continue to rise, smart phone users look forward to a tool that helps them screen inbound calls to the mobile phones by seeing a familiar face and hearing a familiar voice before answering a call.

IPhone owner Mark Benson, a S.F. Bay Area consumer electronics who previewed the app, believes MobiLine will help him add his face and convincing salesmanship to connect with more prospective customers he’s never met. “A lot of my prospects I call are friends or colleagues of current customers,” said Benson. “If, at the beginning of every call, they can see my face and hear my confidence that I’ll get them a great deal, I have no doubt they’ll take my call and become my next customer.” Benson says he’s also looking forward to a related MobiLine feature that allows entrepreneurs and artists to post a two-minute video profile that will, for business objectives, serve as an online video resume. Another smartphone user who previewed the app is Angela Gurgova, a New York City resident. 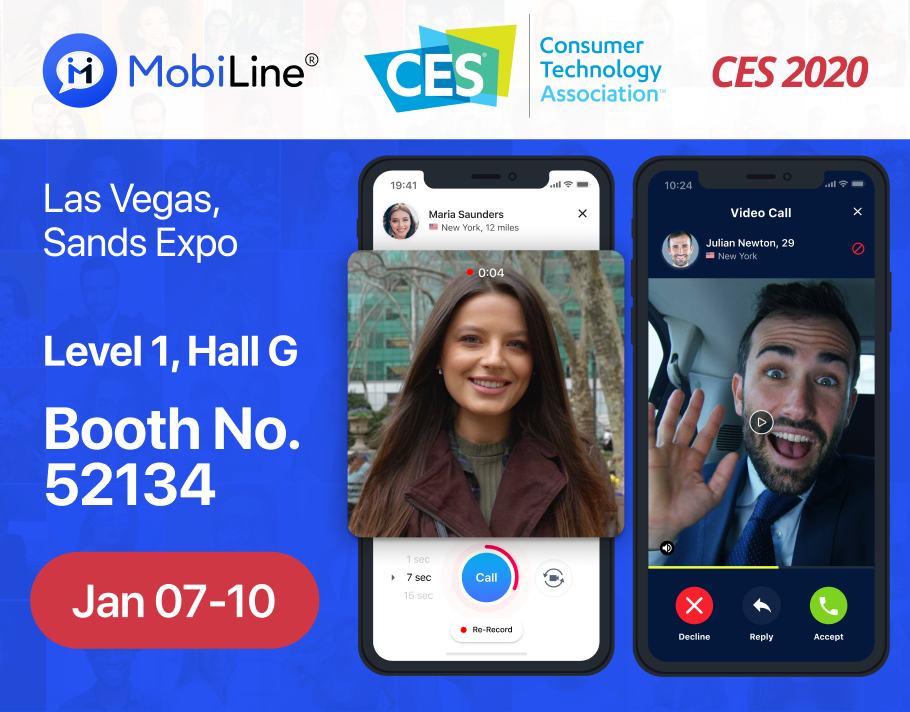 “I have an extended family with 13 aunts and uncles and dozens of cousins and we’re always in touch,” said Gurgova. “MobiLine will help me strengthen my ties with family and I’ll use it to block unwanted calls from telemarketers”.

According to recent Google survey of online users 18 and older, 46% of U.S. adults never make a video call with their mobile phones because they feel it’s intrusive and rude. The board of directors at MobiLine, along with early trial users of the app, agrees that by limiting a message to 15 seconds or less, pre-call videos will feel more like an invitation, not an interruption.

The next logical step for MobiLine’s patent granted video caller ID technology is its integration into iPhone and Android devices.

“As our free app takes off in popularity, the 2.7 billion smart phone users worldwide will trust inbound phone calls from friends and family and will embrace the transition from audio-only calls to video calls. Just as the traditional landline in our homes is becoming extinct because of the convenience of mobile phones, the fundamental nature of a telephone call is about to change from audio-only to video-only,” said Borukhoff. “And with our proprietary technology, MobiLine will compete directly with existing video call platforms, including Skype, WhatsApp, Duo, Viber and Facebook Messenger”. “5G will mark 2020 as the beginning of sweeping changes in how we communicate. It’s an exciting time to be a video tech startup!”

MEDIA INQUIRIES: Reporters interested in learning more about MobiLine or scheduling an interview with a MobiLine executive are invited to contact Tom Attea at Tom.Attea@MobiLine.com . For MobiLine media assets, click here.